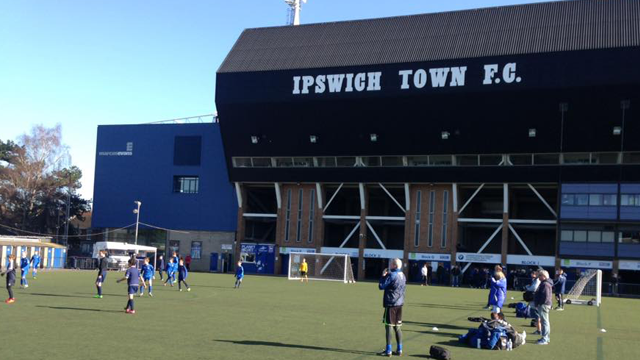 Motspur Park FC, on behalf of our parents, players & volunteers, would like to thank:

Review Of The Day:

The coach departed Motspur Park in the early hours of Friday morning, the tense atmosphere on the bus was only comparable to that of a horror film – the coach was our passage into the unknown. All of our players were understandably nervous to be playing a professional clubs Development Centre. Blissful silence filled the coach, with many players asleep, with others unable to achieve rest, awaiting the challenge that was to come.

As part of the day Ipswich kindly led all the players, parents and Coaches on a tour of their stadium. Mick Mills, Bobby Robson and Terry Butcher may not have been names that the boys were familiar with, but for those of a certain age the successful Ipswich side of the early 80’s will always be remembered for their fluent attacking play. Much memorabilia from this golden age was on view in the trophy cabinet.

The best and most comfortable view in the stadium was sampled from the Directors Box, whilst a little closer to the action the boys sat in the dug out frequented by Mick McCarthy and his coaching staff every other Saturday. The dressing rooms were next on show and as is often the case, the home area had more facilities, space and was generally more pleasant than the away room which still featured old school baths for the players to use after the game.

It was a great experience for all to see a stadium with so much history at such close quarters and thanks must go to all at Ipswich who made the trip possible.

Under the shadow of the Portman Road stadium, spectators were treated to a highly competitive game between two evenly matched sides.

Motspur Park didn’t get off to the best start, allowing Ipswich to take an early 2-0 lead with two very well taken goals. Ipswich continued to pile on the pressure but a string of fine saves from Danny Mepham kept Motspur Park in the tie.

After trailing 3-1 at the half way stage MPFC began to find their feet in the match and took the game to tractor boys. Momentum swung in the away sides favour when left back, Ollie Simmonds, scored an audacious volley from just inside the Ipswich half to bring the score to 3-2. The final 20 minutes were dominated by MPFC and Josh Olowoyo capped off a fine counter attacking move to bring the two sides level.

The game could have gone either way, however, fine displays from both teams left the final score at 3-3.

A crisp, sunny morning in Suffolk saw a high quality game of football between two well matched sides. The game was played as four 15 minute quarters and goals were traded during the first three of these meaning that the score was 2-2 going into the final segment.

However, the MPFC boys asserted their superiority in this remaining period scoring a trio of well worked goals meaning they ran out comfortable winners.

All boys played to a good standard throughout showing an impressive range of passing and movement that allowed them to create many chances only to be thwarted by the excellence of the Ipswich goalkeepers. Both Zak and Benedict scored a brace, with Jonah netting the other goal. Celebrations continued throughout the afternoon with many a ‘pile-on’ and much fun taking place!

The Motspur Park FC Under 13’s proved they were a team not to be underestimated, after achieving a huge victory of 2-1 against Ipswich Town FC U13’s Development Squad.

Ipswich Town showed amazing speed and flair, dominating the early part of the game attempting a number of shots both on and off target. Motspur Park seemed to hold off the attack with a strong defence, but the persistence of Ipswich Town paid off and a super goal scored by Ipswich Town in the Eleventh Minute put them ahead. Our boys kept their heads up and remained determined to get a goal. A super pass from Louis Jack to Thomas Bristeir lead to a cracking shot on goal and the game even at 1-1.

Manager Pat Jack led the half time team talk, who told the team to preform at their best and go into the second half with the belief they could win this. The start of the second half saw our boys find their rhythm as a team, superb passing and several shots on goal soon paid off as a second goal sneaked in by Nabil Awadh. This put us 2-1 ahead.

Ipswich Town fought back but our defence and midfield held strong, during the final minutes of the game a remarkable save made by our goalie Owen Lloyd kept the score at 2-1. A well deserved win showing just how our boys can preform as a team. Well done!

A bright afternoon had hosted a very bright and thrilling performance from the U17’s, against an Ipswich Town side who provided a mixture of U15-U16 opponents to the centre of attention. However, this was never a fixture to under-estimate the quality in ability of the Town squad, despite the final scoreline.

Motspur Park welcomed three additions of the U15’s team into the squad for this fixture, all of which had played a major part in contributing to the victory. The team talk was set out clearly but concisely by manager Callum Green, directing the style of which the team needed to perform to outclass the opponent. The manager wanted signs of desire, determination, team work and flair within the team, and this was clearly demonstrated in the first 9 minutes already being 2-0 up. Ipswich continued to keep the ball away from Motspur, finding gaps and maintaining possession trying to break the lines. The manager demanded to maintain their high-pressing tactic and deliver problems to Ipswich Town’s defensive line. The player’s efforts were rewarded with a further two goals before half-time to make the scoreline 4-0 to Motspur Park.

Half time demonstrated a positive camp for Motspur Park and was highlighted as one of the best team performances of the season, not allowing Ipswich any chances near our debutant Goalkeeper. The task was to stay composed and maintain the pressure on the opposition, be first to the ball and challenge the player’s determination to not let Ipswich have the ball.

The second half delivered just that. With goals being scored one after another, it reached 8-0 and Ipswich decided to play with an extra two players, making this 13v11. Ipswich could not however cope with the high pressure and physicality of Motspur Park, which resulted in team demotivation and further conceding another 4 goals.

In the last 10 minutes of the match, the Manager decided to make an unorthodox switch of positions, allowing both centre-backs to play as a pair of strikers together. Ted Westal, the defender that claims to ‘score when he wants’ then missed three golden opportunities to increase the lead, having scored one already in the game the team had high expectations of him delivering another goal. But it was our captain, Andrew Hammocks, who delivered the final goal whipped in from a lovely cross to head the ball up and over the Goalkeeper. This goal was better than Ted’s! The game wrapped up at a final score of 14-0 to Motspur Park and a very well deserved victory was taken back to London.

Ipswich in true hosting style invited all our players into the Sir Alf Ramsey Stand where pitch-side; Simon Milton, former professional footballer for Ipswich Town FC, presented each of our teams with a pennant for their contribution to the day. Simon’s speech about player development and progression has really hit home and inspired some of our players. After speaking to a group of U13’s they now realise how much they will have to work if they wish to take their footballing further. A great end to a fantastic day at Ipswich Town FC.

Nothing could of better concluded such an emphatic day for MPFC other than the lively coach journey home. In complete contrast to the journey there, our players could be heard supporting each others teams by singing and chanting, the atmosphere was immense with a real sense of community amongst the coach.

However, reports from our managers confirm allegations from the U12 team that Ted Westal (U17’s Joker) got shot down and humiliated when he moved to the front of the coach to get them joining in with the celebrations but they quickly replied with a lovely ensemble of the following chant (an U17’s favourite):